In 1954, Eric Rouffignac and his mother Winifred were living with his grandmother, Granny Daborn. She rented a tied cottage at Brick Hill, and when she died Eric and Winifred had to move.

“When Granny Daborn died we had to leave because it was a bit like Valley End Farm. It  was tied to a person called Chandlers Pole. When that happened he gave us say 2 months or 3 months to look around. And the first thing mother did was she got in touch with George Anscomb, because she was very friendly with him. And he said “Well, go and see Bob Fellows, you know him, he’s got some properties I know over in Chobham, up by Chobham Place.” And that’s where she went, and saw him and he owned all the bungalows up there at Clearmount.”

The little settlement at Clearmount had 4 cottages. It is next to Jubilee Mount, originally the Poor Allotments. There were no trees then, but only heather and gorse. It was possible to see straight across to the Cricketers, now the E&O restaurant. Eric went on to become the Honorary Warden of Jubilee Mount for 37 years.

Winifred and Eric walked across the Common to see the houses. “I remember going up to Clearmount, we walked across the Common, no motorways in those days, top of Round Pond, down into the valley, and up. And all there was was this little tiny bungalow. The brambles were all over it, so the first thing we did, we started chopping everything down, so we could get to the door and then further. It was all done by hand.”

The little cottage must have been typical of many dwellings in Valley End. It was tiny; there were two rooms, and a basic kitchen. There was no electricity, no gas, and no sanitation at all. Outside there was an open barn, for a donkey shed.

The house was condemned, and needed a lot of work to make it habitable. Luckily, Winifred knew builders that she could call on. 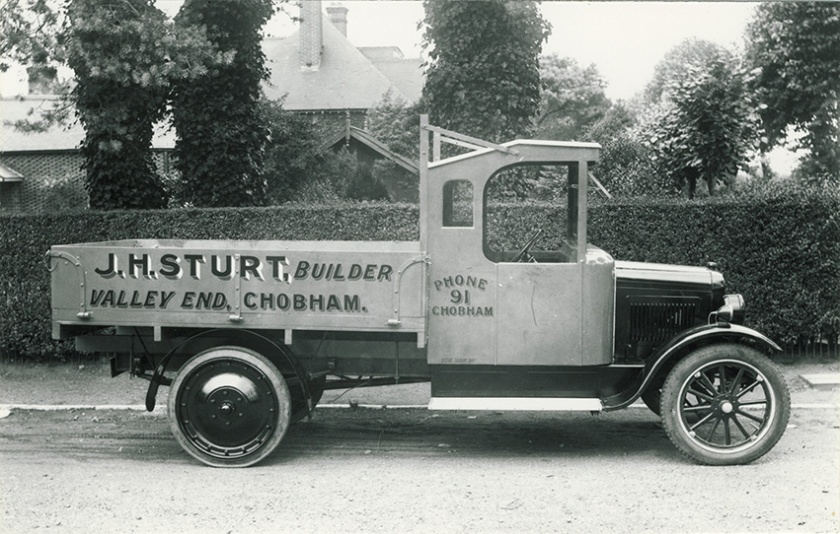 The lorry for Sturt the Builder. (Image courtesy of J. End.)

At that time the main work in the area was in the building trades. “Mother went to school with George Anscomb, Bob Fellows, Sturt, all the builders of the local area.”

The work was done by George Anscomb. He put in sanitation, and completely refurbished it.  Originally, like other houses at Claremount and in Valley End, the cottage had a dirt floor, and this  was cemented over. The old fireplace was altered.

Twenty years later, in 1965, an extension was added to the house, again done by George Anscomb. Eric was unable to get planning permission for a pitched roof. It had to be flat, and it leaked.

It was 1985 before he was given the go-ahead to re-roof. He did the same as his mother; he asked local workmen to do the job.

Tony Fraser did the drawings for a new garage, built first so that it could be used for storage. He had just qualified as a building surveyor. “It turned out to be a difficult build because of the site conditions. The ground was sloping and there needed to be a retaining wall built with a reinforced concrete raft foundation. Also Eric wished to have exposed face brickwork piers and rendered wall panels to be in keeping with the cottage.” (Tony Fraser.) 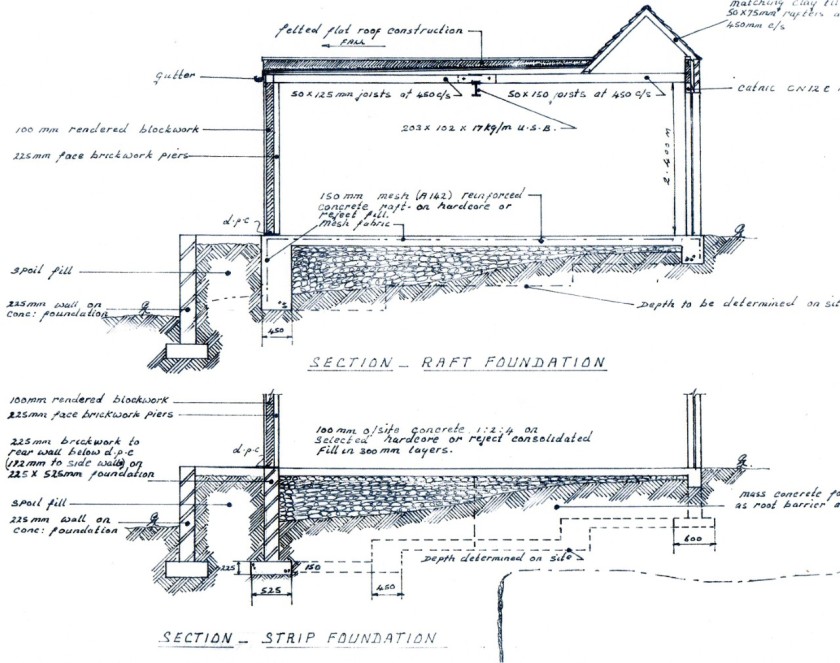 The roof on the old cottage had tiles, but underneath the tiles was the remains of the original heather thatch. Eric thought it was a turf roof, which included the roots of heather and some of the soil, left to make it waterproof.

The old turf roof from the cottage. (Image courtesy of Eric Rouffignac.)

The roof timbers were cut straight off of the Common. They were round lengths of wood, possibly fir, chosen by eye. This made for an uneven roof, with dips in the line. Battens were laid on the timbers, and then the heather was added.

The rafters and battens in the old roof. (Image courtesy of Eric Rouffignac.)

Tony Lovejoy, a carpenter from Brick Hill,  put a pitched roof on the extension.

After this he replaced the old roof of the cottage by constructing a new one, and then removing the old fabric. This was to allow Winifred to continue to live in her home while the work was done. It was a major task.

“There were ceiling collars going around, and there was a plate on there. So what we did we went off that plate but at a different angle. The plate was 4 by 2 wood. We   nailed these new rafters into those collars, so we picked the ceiling up with the new rafters, and then we cut the old ones out afterwards.

They’d got skilling. As the collars were up there and they’d got that skilling we could do it.“ (Tony Lovejoy.)

George Brodie did the tiling on the roof, working with Reg Howard.

In 1996, after Winifred had died, Eric wanted to take the old part of the house back to the original.

Again, local builders and craftsmen worked on the house.

Pete Gosden, from West End, did the electrical work, and crawled up in the roof cavity checking the wiring.

Ken Brooks did the brickwork. The old fireplace was made of soft red bricks, probably made locally. There was a section where the bricks had been worn away by all the wood that had been stacked there over the years.

Tony Raynesford worked on the interior of the cottage, and designed and built a porch.

Eric’s friend Mike Lee plastered the interior. He moulded the skirting boards out of cement, which is how they would have been done originally. The old cottages often had damp problems, and wooden skirtings would rot.

The interior walls were made of wooden frames. The uprights were about 3 inches deep. The offcuts of the wood were probably used to divide the sections between the stakes, which were then infilled with rat trap brickwork. Rat trap bond was a rare type of brickwork, dating from the early to mid 19th century. The bricks were laid on edge before being plastered over.

“What they used to do was to mix goat’s hair or some hair with the lime, and stick it on. The hair used to bind it together.” (Tony Lovejoy.)

They managed to convert what had been a tiny and derelict cottage into a comfortable and modern home, a sanctuary in the woods at Clearmont.

With many thanks to Eric Rouffignac.

With thanks to Tony Lovejoy.

With thanks to Tony Fraser.

With thanks to Mike Lee.